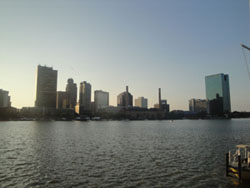 When people think about Ohio, what do they think of? Midwesterners would say Cedar Point, Lake Erie and The Ohio State University. People outside the Midwest would think Cincinnati, Cleveland and Columbus.

But there is a another city, a hidden gem if you will in Toledo. Located in northwestern Ohio, with Michigan bordering to the north and sitting along the Maumee River which flows into Lake Erie right to the east, the Toledo area offers a great zoo, riverfront, parks and a whole bunch more.

I started my trip this past Friday evening in Waterville, just southwest of the Toledo area along the Maumee River and worked my way northeast, always with the water in sight of course. My first stop was at Side Cut Metropark. Alongside all the usual hiking trails, barbecue pits and wildlife I noticed that the river was moving more briskly. Why I asked? The answer: I stumbled upon the Maumee River Rapids. Lot’s of wildlife and fisherman hanging out in the water as well as unusual rock formations.

After leaving the park I quickly came upon historic Perrysburg. There were tons of people out and about in the 1816 Historic District. Why? Because it was First Friday. During the warmer months, merchants stay open late and there are rides and music for the kids in the streets the first Friday of each month. All the restaurants and their outdoor seating was packed too. A great atmosphere.

From there, I took Ohio Highway 65 through Rossford and into Toledo. I was on the opposite side of the Maumee River from downtown when I noticed International Park. I said to myself, perfecto. The river, the Toledo skyline, flags everywhere, outdoor restaurants, lot’s of photo opportunity. After taking some amazing water shots and laying down on a bench for a spell, taking the fresh air in, I went to Cousino Navy Bistro. An outdoor bar with music, a cool breeze, the riverfront, the downtown skyline and a tequilla sunshine, what could be better than that? Very relaxing. Afterwards I walked the riverfront taking some night photos before leaving.

Check out my Toledo area photos to see all the sights I came across. So next time you are driving east-west on the Ohio Turnpike or north-south on I-75, make a stop in Toledo, it surely won’t disappoint.