The hidden gem across the river. Windsor. 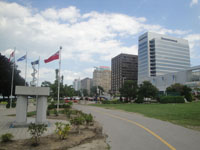 Spending a lot of time in Detroit and along the Detroit River over the years of course I’ve taken a glance at what’s on the other side, usually with curiosity. What’s so special about that you ask? When I’m looking over there I’m not looking at an extension of the city or suburbs or the same state or even the same country. I’m looking at Canada, specifically Windsor, Ontario. It’s pretty amazing to think that another country sits roughly a mile or so away from where you spend a lot of your time.

I’ve crossed the Ambassador Bridge going into Windsor a lot in the past, but it was just a means to get to other destinations: Toronto, Niagara Falls and New York mainly. It was time to explore the city, specifically the riverfront, that sits right on the other side.

With taking lots of photos in mind I had a goal once there, to get a look at Detroit and the area from different vantage points along the riverfront, highlighting all the great parks and gardens Windsor has to offer, while exploring some of the city itself.

Odette Sculpture Park and Dieppe Gardens cover the goal and then some. At Odette Sculpture Park you get the museum feel, you’re in a park, your along the water, the weather is great, what could be better? The park contains sculptures from well known artists from all over the world. My favorite sculptures were the brontosaurus dinosaur, the family of elephants, Morning Flight (birds) and Eve’s Apple. 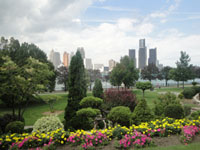 I found the best, most unique and absolutely beautiful shots of the Detroit skyline at Dieppe Gardens. Besides the annuals, perennials and other flowers and plants, this garden contains memorials honoring those lost at war. It’s just another part of the Windsor riverfront where you will see people walking, taking photos, biking or just relaxing on the grass.

Of course when I was there, I grabbed some shots of Caesars Windsor Hotel & Casino which dominates the skyline and took some photos of the old Boblo Island dock. The memories. I found a great place to grab a bite to eat as well, Papa Cheney’s Whiskey Well. The chili fries are unreal and the front of the bar is open to the outside so you can see the river and Detroit skyline almost in full no matter where you sit. Amazing.

Checkout all of my Detroit skyline photos and other Windsor shots from the riverfront. It might not be another country, but you never know what hidden gems lie right by where you always spend your time. Will definitely be checking out more of downtown Windsor next time.