A Weekend in “The Cleve”

Over the summer on a day road trip, as described in Adventures along Lake Erie, I ventured around Cleveland among other places. Some places I wanted to go then, I didn’t have a chance too because I had a lot of ground to cover that day.

Last weekend I had the opportunity to return to Cleveland, or “The Cleve” as some call it, alongside my girlfriend because we had a party to attend. On the way there I learned Cleveland went through a record string of days without measurable snow. Of course on the day we arrived that was going to change as the lake effect snow machine was making it’s first appearance of the season. It definitely would give the city a different look and feel then the last trip.

Edgewater Park again was the first stop. Due to the cold air and snow coming in it was deserted minus the seagals. That didn’t stop us from getting lots of scenic pictures of the Cleveland Harbor West Pierhead Lighthouse, the skyline, the Lake Erie waves and coastline and those feisty seagals. No matter what’s going on in life, I always get that relaxing feeling whenever by the water. It was great. 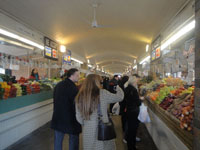 A must stop, that garners a lot of talk even outside the Cleveland area and Ohio is The West Side Market. It resides in the Ohio City neighborhood of Cleveland. There are two separate buildings to walk through. One a typical Farmers Market. Vegetables and fruits as far as the eye could see, all which seemed to be in perfect condition. Everyone was walking around with their cameras and/or shopping. My jaw dropped when I walked in. The other building contained the best quality and variety of meats, seafood, breads, oils, dessert and more that I had ever seen and the prices were reasonable too. Just the atmosphere makes it a place to go to, even if you don’t want to do a lot of shopping. 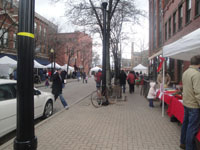 Staying in Ohio City we grabbed some coffee at Lelolai Bakery and Cafe Restaurant a nice little bakery and walked around outside by Market Square Park and several coffee shops. There was holiday music playing outside, there were holiday trees for sale everywhere and Santa was even out with a lot of young kids in line ready to make their wishes known. There was a cold wind blowing along with snow showers, which made the whole atmosphere perfect while sipping on our coffees. Ohio City with it’s history and with it being a popular neighborhood destination in Cleveland, you could definitely spend a whole day here.

We next went to the place most people think of when they think Cleveland, The Rock and Roll Hall of Fame. I had never been there before so I didn’t know what to expect. We were a little disappointed when we got there, but not surprised that they have a no photo/video policy. The artists loaned all the treasurers there for everyone to see so it’s definitely understandable. Walking through and seeing all the displays, artifacts, pictures, etc. for Elvis, The Beatles, The Rolling Stones, Metallica, I grew a greater appreciation for what they have meant to both the music world and society at large. Definitely a place I’d go back to because they rotate out special sections and exhibits, right now the top two floors are dedicated to Bruce Springsteen.

We drove to the Botanical Gardens, but it was getting later, windier, colder and snowier so we decided to save that for another trip. The Botanical Gardens is part of a largest concentration of museums in University Circle. The Cleveland Museum of Art, History of Art, Museum of Natural History, I could go on and on.

After attending the aforementioned holiday party, during which it started snow pretty heavily, and getting a good night sleep, we needed a place to have breakfast. What better place to go then Lucky’s Café. Lucky’s resides in the Tremont neighborhood. We walked a few blocks from where we parked on the snow covered sidewalk watching dogs and their owners having fun, people jogging and others just trying to get out of their driveways. Definitely a small-town feel right in the city. We met up with some friends and went inside.

You may have heard of Lucky’s and their food because Guy Fieri was there on his famous show Diners, Drive-Ins and Dives. After having the food I can see why they stopped here. Everything there is made from scratch on-site even the jelly, ketchup and bread and all of the ingredients comes from places in the general area. I had the “Shipwreck”, hash browns, eggs, veggies, bacon and cheddar cheese mixed together. Amazing. The atmosphere was relaxing and the staff was great too. One of our friends ordered the baked mac-n-cheese, my choice next time.

We ventured back into downtown to the East 4th street neighborhood. We walked through the alley of bars, pubs, restaurants and entertainment possibilities. With the holiday decorations up and the snow blowing we just stood there soaking in the atmosphere. The alley and everything inside was empty, but that was going to change soon as the Browns were going to start playing. Throughout this weekend we saw lot’s of people walking around with the famous brown and orange gear on. This city is dying for a champion and the place will absolutely explode when the Browns, Cavs or Indians win a title.

What a weekend! Check out my photos from the weekend fun and also checkout the Cleveland photos from my trip here over the summer. Cleveland keeps reinventing itself and there are so many more things to do, plus I’ll be back to load up on veggies and desserts from The West Market. Get there!