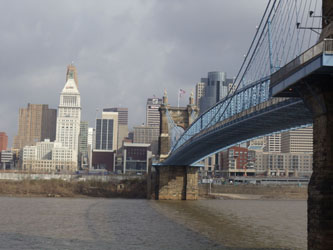 Cincinnati. The Queen City. Northern Kentucky. So much history, so beautiful and so many great places to see. I’ve talked about my time in this area before but I thought I’d give my top ten list of things to do (so far) when in Cincinnati and Northern Kentucky.

Skyline Chili. This is the one place people think of when they think Cincinnati and dining. There are several locations in the area. Make sure to get the cheesy coney’s with chili. They have their own secret recipe. Don’t forget to put the bib they give you on!

Zip’s Cafe. Get a Double Zip Burger with cheese along with cheese and chili fries. You might get hooked like me. Zip’s Cafe sits right in the heart of Mount Lookout an eastern Cincinnati neighborhood along with several other restaurants, bars and nightlife options.

Devou Park. The hills become higher and more numerous as you approach Cincinnati from the north and they definitely keep up their intensity as you enter Kentucky. A great place to get a panoramic view of the city, Ohio River and the Northern Kentucky suburbs.

John A. Roebling Suspension Bridge. Standing along the Ohio River in Covington, Kentucky you get amazing scenery and some great photos from both the east and west side of this amazing landmark. Open since 1866, you’ll find pictures of the iconic bridge everywhere around town.

Purple People Bridge. A pedestrian only bridge around since 1886. On one side you have Yeatman’s Cove Park and downtown Cincinnati on the other you have downtown Newport, Kentucky with shops, restaurants and the Newport Aquarium. It’s neat to be able to walk and say I’m in Ohio, oh wait I’m now in Kentucky!

Theodore M. Berry International Friendship Park. Sitting right along the Ohio River, whether your running, walking or just hanging out you’ll see various gardens (each representing a different part of the world), sculptures and homes off to the north in the hills.

Yeatman’s Cove Park. Also along the Ohio River, it resides in downtown and on the location the city was founded. You can grab a cart and go riding up and down the central riverfront. Run up and down the Serpentine Wall that separates the park from the river, also a perfect spot to catch a concert or other event. Get great scenic shots of the city and Roebling Bridge. You can flow from one park to the next, running along the river on a nice day, can’t beat that!

Eden Park and Krohn Conservatory. Eden Park resides near the Ohio River but up in the hills. It’s home to a fountain, lake, the Cincinnati Art Museum, magnificent views of both Ohio and Kentucky and a conservatory. Krohn Conservatory is home to an indoor tropical and rainforest setting with flowers, trees and plants from all over the world. There is an international butterfly show coming up too.

Carew Tower. What ever city I’m in I have to go up the tallest building to get a view of everything. Standing up-top Cincinnati’s tallest building on the observation deck (the 48th floor) you get a great view of the skyline and the rest of the city. On a clear day you can see the suburbs in Ohio, Kentucky and Indiana.

Attend a Cincinnati Reds baseball game. Known as baseball’s first professional franchise founded back in 1882, the Red Stockings, they have so much history. Great American Ball Park, sitting right on the riverfront, makes for the perfect day outside.

Checkout one of my day road trips there in a previous blog entry where I go into more detail on some of the places I just described. What is your favorite thing to do in southern Ohio and Northern Kentucky? I still have to checkout Montgomery Inn, Findlay Market, the Newport Aquarium, take a Ohio riverboat ride and go to the Cincinnati Reds Hall of Fame. What else do you suggest?