Another city, another opportunity to go up-top a tall-building (skyscraper) to capture the city and beyond. This time the city is Cleveland, Ohio and the building is the historic Terminal Tower. The Terminal Tower completed in 1930, was the second largest skyscraper in the world at that time. It’s the second tallest building in the city today. 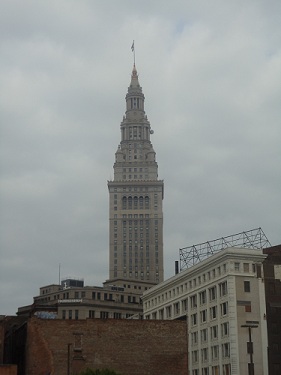 It’s part of Tower City Center which houses many companies, has a shopping mall, two hotels and is the hub for the cities rapid transit. The tower is 52 stories, 709 feet tall, with the observation deck being on the 42nd floor. You can get up-top for a small fee, it being open only in the afternoons on Saturday and Sunday. You take an old school elevator up to the 32nd floor, get off and then take another elevator the rest of the way.

Once up top, you’ll notice the great views right way. You’ll see the tallest building in Cleveland, the Key Tower, at 947 feet. Behind that you’ll see Lake Erie and the lakefront airport.

Thought obstructed you can see Cleveland Browns Stadium home to their NFL team. To the right of that is the Great Lakes Science Center and the Rock ‘n Roll Hall of Fame and Museum. Lake Erie, no land as far as the eye can see!

Looking straight down from that same window you’ll see the Public Square and the Old Stone Church built-in 1855.

Looking out to the west, you’ll see the coastline, marina, Edgewater Park and beyond. You can see the Main Avenue (Harold H. Burton Memorial) Bridge in blue which goes over the Cuyahoga River and is part of the Cleveland Memorial Shoreway.

A shot to the east.

A good shot of the Cuyahoga River and points south. 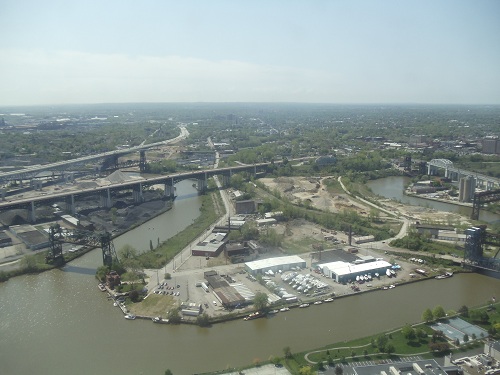 In the center of this shot, is West Side Market, a foodies paradise. The market is in the historic Ohio City neighborhood which has lot’s of shops, coffee houses and places to eat.

It was great trip up-top Terminal Tower, seeing and capturing some great views of Cleveland. 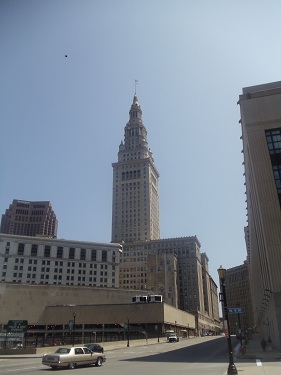 What other vantage points in Cleveland do you recommend for capturing the skyline and city? What was the last building you up-top in that you would recommend?