Chicago: The Line to Doughnut Vault.

It was an early Saturday morning in Chicago during the #WindyCityTweetup and me and Leah of Leah Travels headed to The Doughnut Vault. We came to know of the place because of Raul of Ilivetotravel. He thought it’d be a great place to grab stuff for the group for breakfast.

We got there about 9:30 and saw the long line right away. It went from the front door on N. Franklin St. and turned the corner going down the sidewalk on W. Kinzie St.

There was a light rain falling on-and-off and it had been about half-an-hour and we barely moved. We were making jokes with the people behind us and talking amongst ourselves on the fact that we could take the people who were walking by with the donuts haha. By this time, we were like, Raul!!! All in good fun of course.

Right in front of us was The Gilt Bar. It actually is owned by the same person as The Doughnut Vault. He decided to open this petite donut shop right next store a little over a year ago. They open at a set time everyday, but only stay open until their donuts for the day are sold. We worried that we’d get near the front and they would yell out, “We’re sorry, but we’ve sold out for the day.” That would be terrible.

After about an hour, we made the turn onto Franklin… 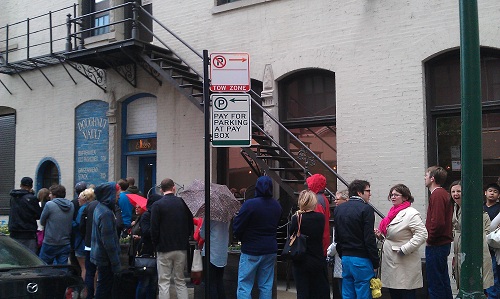 …and before you know we were at the front door. Not knowing anything about The Doughnut Vault at the time, I hoped there wasn’t along line inside too.

Once getting inside, it was quite the opposite. It was a small room about the size of a walk-in closet with one girl behind the counter, taking one customers order at a time. 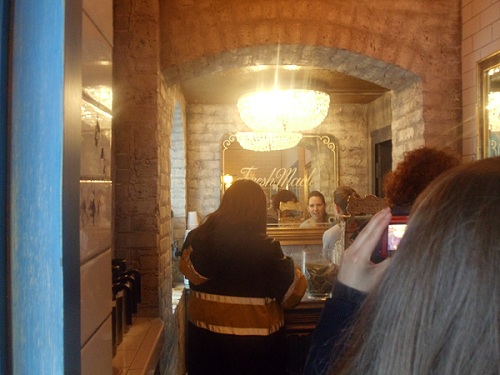 The menu was displayed outside the front door to the left and also on a bigger plaque inside. The everyday donuts are buttermilk old-fashioned, gingerbread stack and chestnut, vanilla and chocolate glazed. They also have a donut of the
day, of which today is double chocolate yellow cake. It was sold out. Also, a tip for future visitors, its cash only. 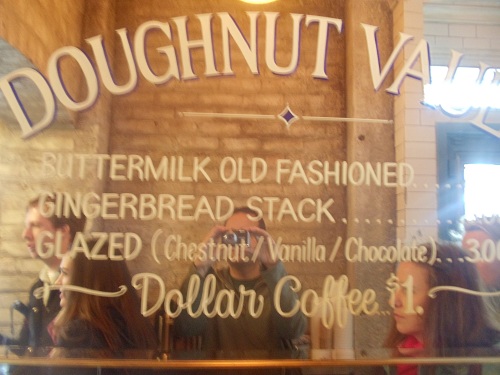 We made it to the counter and ordered a small assortment. I choose a chestnut glazed and a chocolate glazed donut. The hour-and-a-half journey was complete! 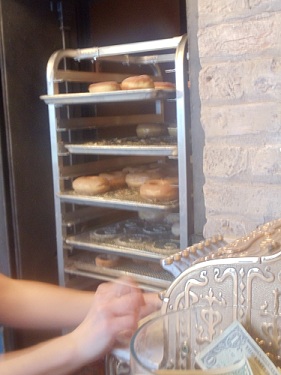 As we walked back to the vehicle, which oddly enough we found a space right in front on the street, I saw a seating area, not that anyone would be sitting there in the rain.

Back at home base for the out-of-town travel bloggers, Sofitel Chicago, everyone consumed their donuts. They were big donuts and quite tasty. Definitely would be full for a while or until the next foodie opportunity presented itself. 🙂 More on that later.

It turns out they didn’t sell out until 1:23 p.m. that day. I realized after the fact, that their Twitter feed keeps everyone appraised as to how many dozen donuts of each type were left, when one sold out, how many people were in line, what the special of the day was, etc.

The waiting in line for the donuts kept being mentioned all day long, as away of teasing Raul. 🙂 In all honesty, I was thankful that he found such a popular and well-known place that everyone gravitated towards. Being a foodie, it was great checking out the best donut shop in town. In fact it was named one of America’s Best Doughnuts by Food & Wine Magazine. Also, it was great chatting and getting to know Leah better during the long wait.

If you love donuts and are in Chicago, I’d definitely recommend hitting up The Doughnut Vault for the experience. What places have you waited for in a long line foodie wise? What food would you almost wait any amount of time for?

6 responses to “Chicago: The Line to Doughnut Vault.”