Pier 39 is off The Embarcadero within Fisherman’s Wharf in San Francisco. It’s one of the more popular destinations for tourists with dining, shopping and live entertainment options. The biggest form of entertainment for many, including myself, are the sea lions that reside on the docks.

Head to the left side of Pier 39 and just look for the crowd as they gather along the railings. You’ll also start smelling the sea lions as you get close. Well there they are! 🙂 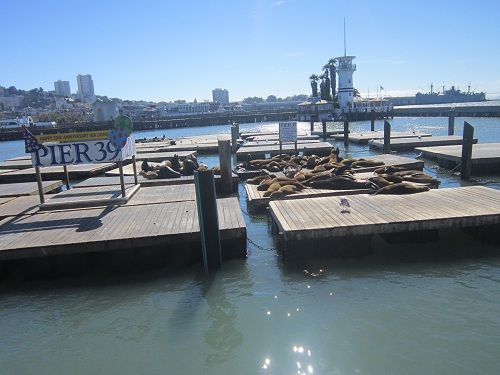 A lot of the time they are just cutely laying about, sunbathing if you will, slipping in-and-out of the water from time to time. What a relaxing lifestyle.

They’ll make the time though to get up and loudly bark. The sea lions have always been in the San Francisco Bay region, but have been coming to this spot for just over twenty years. When they first came, it drew the ire of fisherman who didn’t want them around the docks. Over time though these docks have become their home for much of the year. 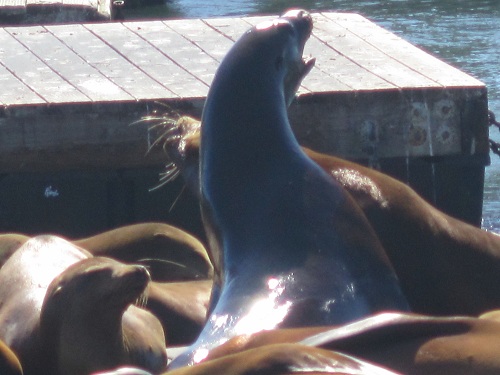 This one needs some space to take a nap, probably after some fighting. The sea lions are always pushing one another off the piers. All of their acts lead to laughter, constant video taping and picture-taking. 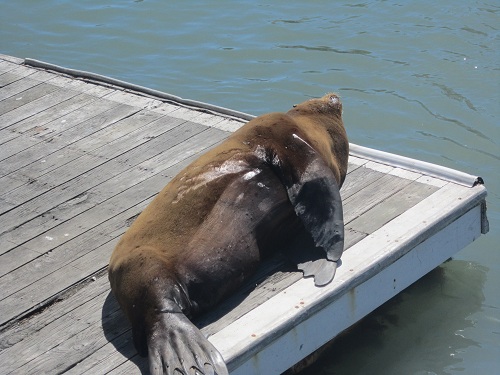 Last summer to late spring is the time you’ll see hundreds of them hanging out here. They go off to breed in the early parts of summer and few if any will be around. Many tourists that come during the time, are sad wondering where they are.

You don’t have to be there to see what they are up too. Checkout the Pier 39 sea lion live webcam. When you do have a chance to go to San Francisco, head towns the wharf and pier and hopefully the sea lions will be there to greet you. 🙂

Where else have you seen sea lions in your travels? What other spots along Fisherman’s Wharf in San Francisco are must stops?

4 responses to “San Francisco: The Sea Lions of Pier 39.”