Lot’s of non-chain coffee to be consumed this year. Atlanta, one of my home bases, will be playing a big part in #ElCafeDe2013. I’ve hung out, consumed caffeine and worked at various non-chain coffeehouses before, but on a late-January day I got a first taste of coffee in the ATL this year at two new stops.

The first stop in the early afternoon was in the Grant Park neighborhood, right across the street from the historic Oakland Cemetery in The Jane at Grant Park. I walked into a packed Octane Coffee.

There was lot’s of pour over coffee to be made. Every cup is brewed fresh to order in a french press.

The choice on this afternoon was a basic latte to go. I wanted to grab something that I could carry as I checked out Oakland Cemetery, after exploring Octane. Naturally a seat opened up as soon as I got my coffee. A bonus though was that I liked the design of the cup with logo front-and-center, versus getting a undescript white mug.

Made sure to checkout the cream/sugar station. Love comparing and contrasting them from place-to-place. 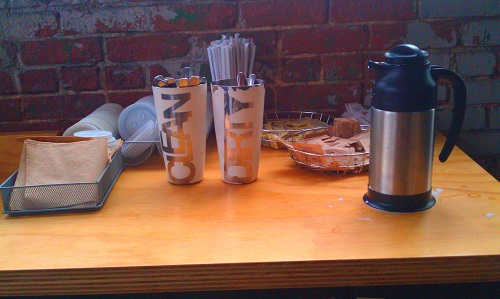 …and not just coffee, but also beer, wine and cocktails. Octane Coffee is known throughout the United States having been recognized by Bon Appetit and Travel and Leisure magazines.

Later on during Happy Hour I ventured over to Peachtree Street in the Buckhead neighborhood to checkout Café Intermezzo.

It had the feel of a fancy, European coffeehouse inside. Lot’s of people were dressed up and sitting at regular tables. I decided to sit at the bar…

…and mix it up by getting a Bailey’s Coffee, topped with whipped cream. Just what the doctor had to order after a day of running around the ATL. The Bailey’s (the alcohol) came separately from the coffee so I sipped some on the caffeine goodness before pouring the alcohol in. 🙂 There were hundreds-upon-hundreds of choices of drinks in their beverage book which is always changing. 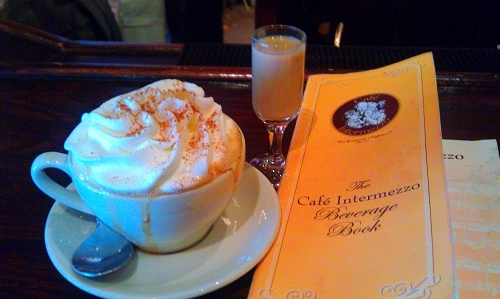 I’d heard great things about their desserts and specifically their cheesecake so I walked over to their dessert case (display) and they kindly asked me if I had any questions. I only had one. Chocolate? They pointed me to the chocolate cheesecake. It was delicious!

The first Café Intermezzo location opened in 1979 and they offer a full menu for breakfast, lunch and dinner. They had exceptional service, asking me how I was doing every few minutes. Definitely a place for a first-date, a drink after work, or a nice meal with friends and family. They have higher price points, but the experience and atmosphere more than made up for it.

Octane Coffee and Café Intermezzo was a great way to kick off the coffee drinking year in the ATL. What places in Atlanta, Georgia and the South would you recommend for my next cup?

2 responses to “#ElCafeDe2013: Diving into the ATL Coffee Scene.”