Thank you to Pola of Jetting Around for inviting me to write about three travel regrets.

It’s a change of pace to write about things travel related that I didn’t do. Things I wish I would have, no matter the reason. I can look back and think of three travel regrets.

1. The Layover in Sydney. I had a twelve-hour layover in between flights a couple of years ago on my way to New Zealand. I did take advantage by leaving the airport and heading into the city, seeing the Sydney Opera House, the Harbour Bridge and Sydney Cove up close. I headed back though to the airport several hours before I could have because I didn’t want to take any chances on missing my next flight. At the airport everything went smoothly so I wound up with lots of time to kill.

Right before I left downtown I was standing by the entrance to the ferry that was heading to Manly Bay and Beach. I’ve though myself I could have gotten on the ferry, explored and been back in plenty of time. I also thought, I could have climbed the Harbour Bridge instead of just walking on it and checked out other things. Its not every day you travel to the other side of the world, let alone have a layover in such a great place. Maybe someday I will turn that frown upside down. 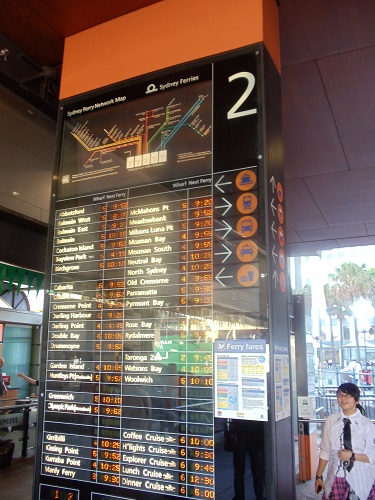 The ferries to Manly Bay in Australia left from Wharf 3. Also, stood next to the Ferry Schedule at Wharf 2 in Sydney.

2. Photo Taking. As time goes on, with every trip these days seems to come more–and-more photo taking. I regret not taking as many photos, even as little as one at each stop on previous trips. The memory of most of those trips is still there. But to have just one photo of a places I’ve been that don’t exist anymore, like the old Cleveland Municipal Stadium or a place I can’t put a name on, like a great polish restaurant I was at in Montreal, is a big regret I have.

3. Christchurch. I was in Christchurch for a while, leaving only a week before the February 2011 earthquake. You may be thinking why would I regret leaving right before a major catastrophe. The fact that I wasn’t there to help a place that I became so close to, along with helping and being there for loved ones is something I think back on a lot and wished I would have been there to lend a helping hand immediately after.

Bridge of Rememberance in Christchurch, New Zealand right before the earthquake. In need of extensive repair now.

Thank you again Pola for tagging me. Here are her three travel regrets. I’m interested to hear about some of the travel regrets Anis of Five Footer Traveller, Ellen of Feugomania and Bryan & Jessica of asixpackofstories have.

Do you have anything you look back on and regret in regards to travel?

22 responses to “My Three Travel Regrets.”