I’ve traveled a lot over the years by car, plane, train and on foot. Never exclusively by water. Never via a cruise ship. A new experience was in store for both my fiance and I as we got ready to go on a Celebrity Alaskan Cruise.

There were a few things, concerns if you will, going through my head beforehand. I love being out on the open road traveling, being able to venture as far or as short a distance as I desire. How I would feel being so-called “trapped” in a small area, with water all around, for two days at a time?

Once on the cruise ship, I started walking and exploring going in a given direction until I met railings outside or a dead-end inside. I had the confined feeling. 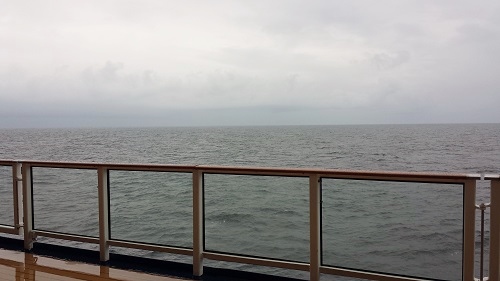 As time went on though I realized with the width of the cruise ship and the number of decks, there was more than enough things to checkout. With a library, multiple pools, bars, a theater and casino, an outside lawn and more, there was lots of exploration possibilities.

Being on an Alaskan cruise and going through the Inside Passage we were pretty close to land at all times so every time you looked the landscape and water were different and always spectacular. I thought to myself, I wasn’t trapped. There is the Tracy Arm Fjord right in front of us from our concierge room and the mountains from an outside deck with Skagway straight ahead. 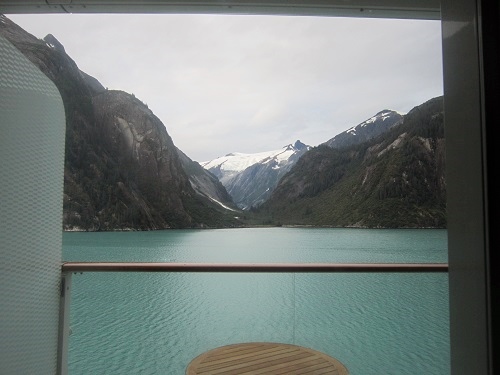 Another concern was the weather and the waves and the possible motion sickness as a result.

The first night while trying to sleep, the waves on the open sea didn’t help my thinking. It seemed to be much better when out-and-about and having fun than when parked in one spot or trying to rest in the room. Checking out the waves up close in front of night two seemed to help. 🙂

Throughout the week-long cruise I noticed a lot of people wearing wrist bands and patches by the ear to help combat the motion sickness.

Not packing enough was at the forefront of my thoughts too. Swimming, the excursions, having to pack for all seasons and the formal dinners and functions on the ship all lead to what if I forget to pack something.

While on the cruise ship you could hangout and enjoy everything at your own pace, even more than I realized. What about the formal dinners and other functions? The timing of those was somewhat loose and if you felt like getting soft-serve ice cream and random assortments of food for dinner wearing shorts and flip-flops, you could have at it. There were plenty of shops on the ship and at the ports of call in case something was really needed.

Now on the silly side before the trip I was thinking about what I was going to do about my morning coffee. The excursions and ports of call fun were thought out ahead of time so I knew that there were coffee opportunities off the ship. What was on the cruise ship was more of mystery until we got on it. The first morning put the biggest smile on my face when I read the ships daily newsletter and saw that they had a grind of the day at a coffee shop on board, Café al Bacio!

What a sigh of relieve. With specialty drinks and more, that meant it wouldn’t be exclusively black coffee on the open water. 🙂

A lot of the worries and concerns I had beforehand turned out to be an afterthought as the cruise got going. The Alaskan Cruise was an amazing experience for the both of us and next time I can just say, “No worries!”.

What things or concerns were on your mind before your first cruise?

11 responses to “Pre-Cruise Concerns, No Worries!”