It’s been over four years since I made my first travel bucket list. Boy does time fly. Alaskan Cruise done. Small-town holiday carriage ride check. Driving all of the Great Lakes Circle tours to completion, off to a great start. Besides that though I have not had the chance to do anything else on the list.

That isn’t to say I haven’t done anything. The last four years have been great. Lots of travel yes, but I have also gotten married, purchased a home and recently our first child was welcomed into the world. More on that wonderful addition in an upcoming post. 🙂 I have also become obsessed in a good way with a thing called coffee and I now look at the coffee shop as second home.

Keeping all that in mind my priorities have changed. While the things at the top of my original travel bucket list will stay, this edition will feature more items close to the homestead, a lot involving coffee and also ones related to family and kid travel. As with any list like this it is always a work in progress.

Well as I like to say, without further ado:

That is my updated travel (and coffee) bucket list. Hope to see you all “Out on the open road”. 🙂

What are some new additions to your travel bucket list that were not on the first edition?

November. It’s a time in my neck of woods when summer is in the rear view mirror and cold weather, snow and ice are right around the corner. Also, football is front and center, Thanksgiving is approaching, you can run through corn mazes and pumpkin themed food and drinks are aplenty.

More recently it’s a time when you’ll see many guys growing out their facial hair, more specifically growing a mustache, some in very unique ways. It’s Movember. Movember spans the month of November and helps to raise awareness of prostate cancer and other men’s health issues.

I was nominated by Leah of Leah Travels to create a Manly Bucket List and help the Movember cause. Well without further ado:

Driving through Rotorua in New Zealand and on I-75 in Knoxville, Tennessee, I’ve passed by the most common places to zorb. I’ve missed the chance to roll down a hill in a transparent ball filled with water. Hopefully not on the next drive by.

Get Out on the Open Road in Oceania

I’ve done some road tripping on the North and South Island’s of New Zealand, becoming addicted almost immediately, never putting the camera down. I hope to expand on that in New Zealand by going for a ride on the Forgotten World Highway and moving over to Australia to experience the Great Ocean Road and more.

Not long ago I was in Sydney for a short time, getting my first taste of Australia. I only had time to walk onto the well-known Harbour Bridge. I was in amazement. My eyes would be open even wider if I could do the Harbour Bridge climb.

I’ve been a hard-core Broncos fan since the 1980’s and John Elway days. Watching The Drive and The Fumble got me hooked on the Bronco Orange. I’ve seen Bronco games in person since I was a kid in Cleveland, Buffalo and Pittsburgh countless times, but never in the Mile High City. One day I want to hop on that plane towards the Rocky Mountains and experience the thin air and Denver football. 🙂

An Irish Coffee In Ireland

Probably my most specific bucket list item. I picture myself having an Irish coffee in a small-town in Ireland on a cool morning with lots of green grass, hills and trees around. The closest thing I’ve come to that is enjoying an Irish coffee or two during happy hour at Buena Vista in San Francisco. I’m waiting for my ticket to be punched for the whiskey train to Dublin. 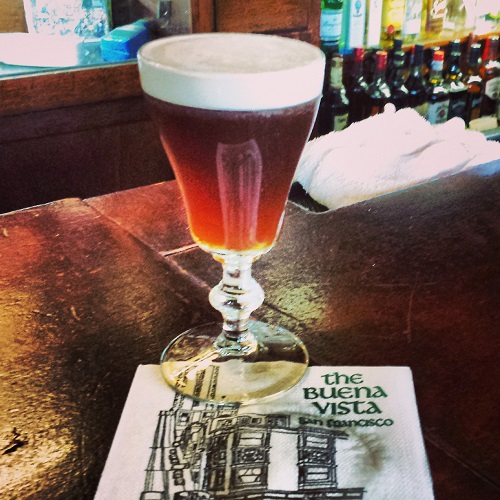 What a great exercise it was creating a Manly bucket list, but what an even greater cause. To learn about and help the Movember movement fellow bloggers:

Not a Blogger? No problem! You can still help:

Make sure to tweet, Vine, Instagram or post to Facebook with your own manly photo or text using the hashtag #ManlyMoments. One dollar will be donated to Movember by Made Man. As a bonus you’ll be entered to win a trip for two to Las Vegas to experience your very own Mancation.

It’s that time. Time to nominate five bloggers to come up with their own Manly Bucket List:

Thanks again Leah for the nomination. To helping this great cause!

Indianapolis: Butler-ing It Up at the Final Four.

The first weekend of the NCAA Men’s College Basketball Tournament just wrapped up, part of what is known as March Madness. All this college basketball going on brings back memories from 2010 when I had the chance to experience the Final Four in Indianapolis. Arriving at the hotel I had souvenirs, special event passes and championship game tickets waiting for me, provided through a vendor at my day job. 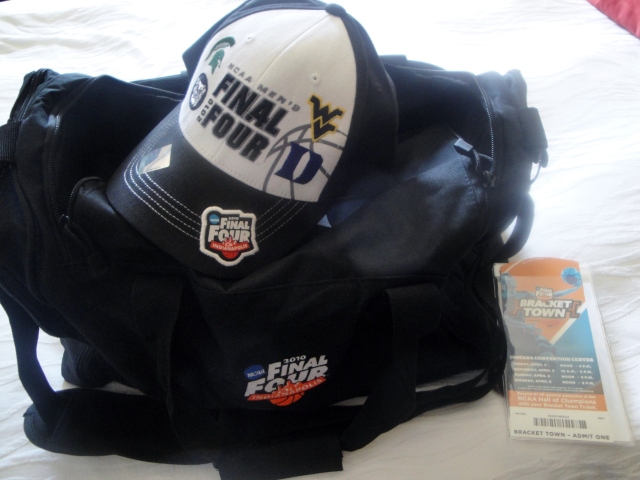 What made this weekend even more exciting was the fact that a home-town cinderella was taking part, Indianapolis’s own Butler Bulldogs, as well as…

…the team and school I’ve been cheering since I was little, the Michigan State Spartans.

The Duke Blue Devils and West Virginia Mountaineers were also there, as well as signage promoting the event throughout the downtown area. There is no better place for the final games than Indiana, the true home of basketball. The passion is unmatched. Just take a drive through the countryside and you’ll see a basketball net hung up everywhere imaginable. 🙂

Before the basketball hoopla I took advantage of the passes to the NCAA Hall of Champions, where you can checkout the various champions in countless collegiate sports and…

One of the special events over the weekend was Bracket Town.

There was great food, entertainment and basketball experiences for people of all ages.

Indianapolis threw a great party. Of course here and throughout the weekend you were bound to run into celebrities, coaches of other college basketball teams not playing, announcers and who knows else.

I had the chance to watch a cook off up-close with a certain head coach from the Indiana Hooisers and the main boss of the Georgia Tech Yellow Jackets (he now coaches at George Mason University). Also, over the course of the weekend, even though I’m a Spartan fan, it was nice to get an autograph and my picture taken with Michigan Wolverines basketball coach Jim Beilein.

I didn’t go to the semi-final games where unfortunately Michigan State lost to Butler. 😦 Duke beat West Virginia in the other game setting up a match of goliath vs. the hometown small-school cinderella. There were lots of “Hooisers” comparisons being made. Will Gene Hackman be making an appearance I thought. 🙂

The National Championship game day began with a Butler Bulldog pep rally in Monument Circle, the center of the city. 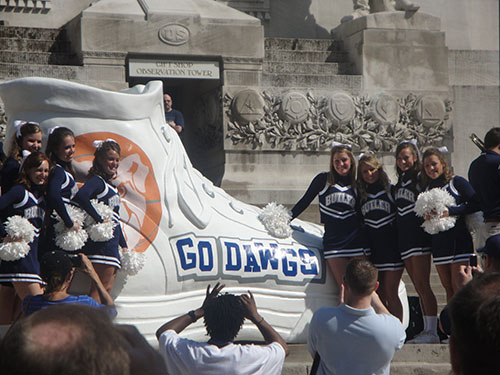 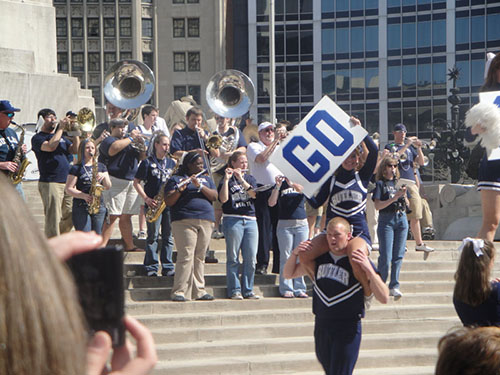 A good crowd gathered wearing lots of blue and white, me included. I became a Butler Bulldog fan over the course of the weekend. I was a little disappointed when they lose a few days ago in this years tournament.

All the hoopla was over, it was Monday evening now and game time. It was time to head over to Lucas Oil Stadium, home of the Indianapolis Colts NFL football team. They used to play the Final Four and National Championship games in traditional basketball arenas, but due to increased media demand, fan interest and of course the bottom line, most are now played in domes and indoor football facilities. 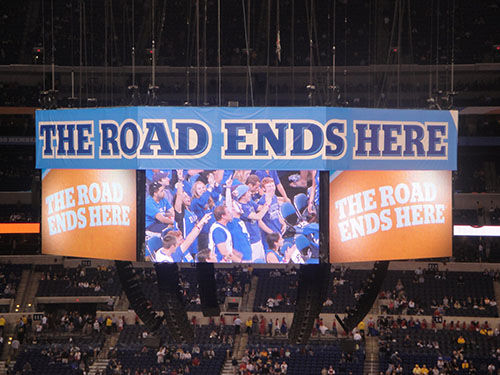 The hometown Butler Bulldogs and the traditional-power Duke Blue Devils are about to do battle.

It was finally hitting me. I was at my first championship level sporting event. I can check something off the good ole travel bucket list. 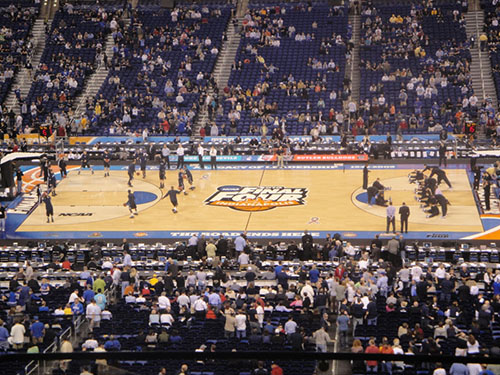 The battle lines were drawn. Butler students and fans alongside the floor on one side.

Duke fans on the other. Of course the crowd was predominantly for the hometown team.

I wore the blue and white proudly watching the small Indiana school come within one half-court shot of shocking the country and winning it all. 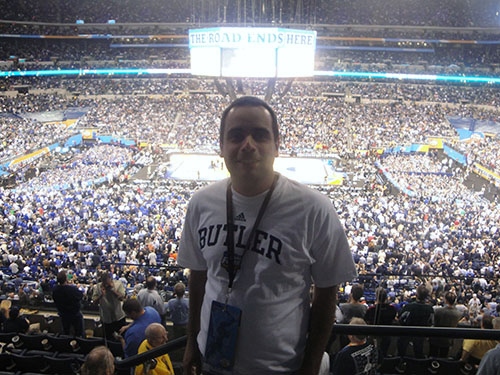 There was no Hooiser magical ending as Duke took home the final prize, but the Bulldogs captured the hearts of the nation and provided a weekend myself and Indianapolis will never forget. 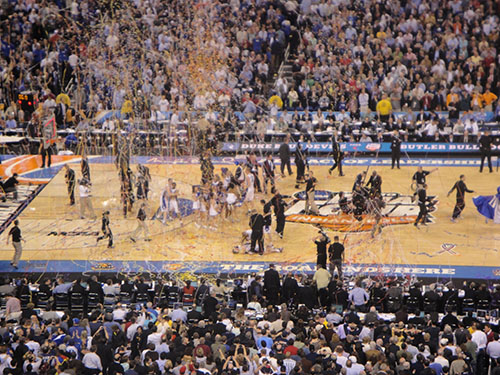 While in Chicago recently I was standing at the corner of E. Jackson Blvd. and S. Michigan Ave. taking pictures of the Art Institute of Chicago, which I was waiting for to open, from across the street. Someone came up to me and asked if I knew of U.S. Route 66. Having just added the famous and historical route to my travel bucket list, to drive the length of, they peaked my interest.

They then said you might want to take a picture of that. I turned around to what they were pointing to and this is what I saw…

…the eastern end of the historical U.S. Route 66, also known as the Mother Road. If that’s not a travel sign (literally too of course) I don’t know what is. I was excited to go to the Art Institute and just like that, the traveler in me was saying get in the car and start driving the length of this route.

I didn’t on that day. After taking pictures of the sign I went on to the Art Institute which had opened by now and had an amazing experience. They have a great collection and lots of famous pieces.

Thinking still about U.S. Route 66 later that day, I realized just last year I was at the western end of the route when I was in Santa Monica, California and at the well-known Santa Monica Pier. I wish it would have dawn on me at the time the signage that was there too.

In your travels, what have you run into by accident that changed your travel thoughts right on the spot? Just adding the route to my travel bucket list and then running into this sign, I’m thinking hitting the open road on the historical U.S. Route 66 might just be in the cards. A travel sign indeed.

Happy 2012 everyone! I reflected on 2011 in a previous post and thought to myself, where do I want to go and what are my goals for travels this upcoming year and beyond.

Joining Travel Bucket List Wednesday’s (checkout hashtag #TravelBL on Twitter) has inspired me to think about future travels as well and to come up with my own travel bucket list.

Well without further ado (not including the random day-trips):

That is my bucket list. I’m sure I will add, remove and hopefully cross-off a few things on the list as time goes on. As always I hope to see everyone out on the open road. 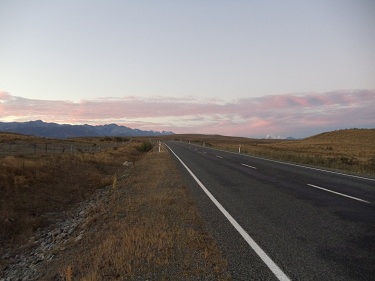 What is at the top of your bucket list for the upcoming year or beyond?