A Flatlands Coffee Experience Is On Its Way.

Previous, I wrote about Flatlands Coffee and their Kickstarter campaign to open up a third wave coffee shop in downtown Bowling Green, Ohio.

They didn’t quite reach their goal, but by no means was that the end. Ben and his wife Cassy share a passion and knowledge of coffee and along with some re-marketing, branding and the experience they gained the first time, they just relaunched their campaign.

Their goal is to open up a multi-roaster coffee shop, hand-crafting each cup of coffee, along with participating in the coffee industry through on-site brewing competitions and more.

You can find them on Facebook and Twitter. Also, checkout their new Kickstarter page to see more of what they are all about and how you can help.

I’m looking forward to getting out on the open road to Bowling Green and experiencing the coffee, atmosphere and everything else that Flatlands Coffee will have to offer. 🙂 To more great coffee! Go get em guys!

Spending so much time in the Midwest, it’s kind of remarkable that covered bridges and I have never crossed paths. That changed recently as I drived (dived) into the covered bridges scene while roaming around the extremely rural roads of north-central Ohio.

My first stop was the Parker Covered Bridge just north of Upper Sandusky. Getting there involved going onto one remote county and township road after another, each one usually less kept up than the last. I actually didn’t see another car or person either to or from the bridge once I got off the main highway.

Upon arriving at the bridge I quickly realized many were one way and built back in the 1800’s and early 1900’s.

The Parker Covered Bridge, a part of Township Road 40, was originally built-in 1873 by J.C. Davis and spans 172-feet over the Sandusky River. It is one of two bridges in the county on the National Register of Historic Places. 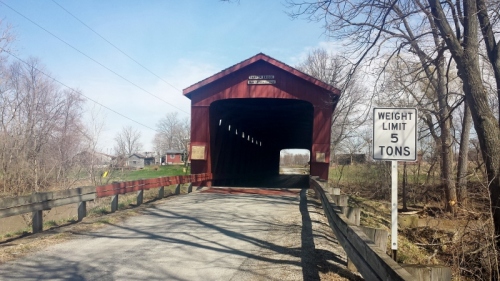 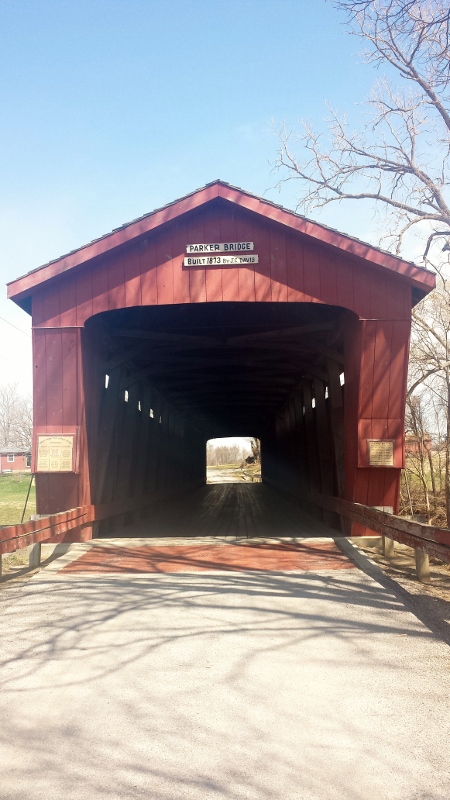 I turned around to look back at the countryside route that brought me here and then walked through the wooden bridge to checkout the other side. Some say these bridges were built and covered so that horses wouldn’t here the river underneath and be scared to cross. 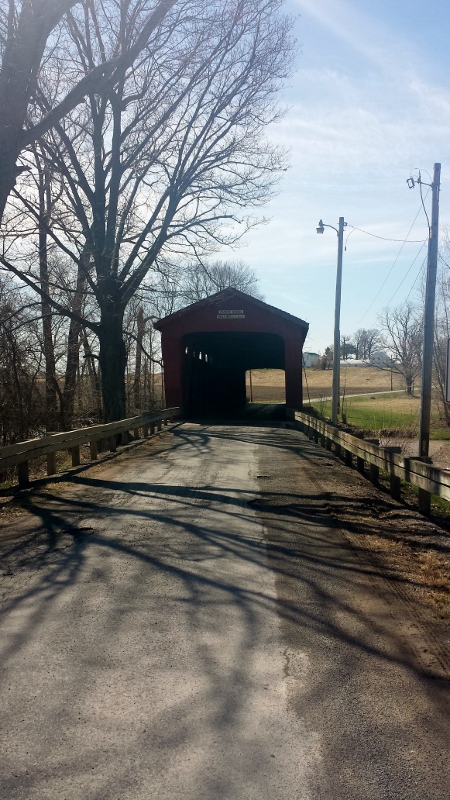 About fifteen miles away sits the other covered bridge in Wyandot County that is historically registered, the Swartz Covered Bridge. I was out on the open road approaching the bridge along County Road 130A. 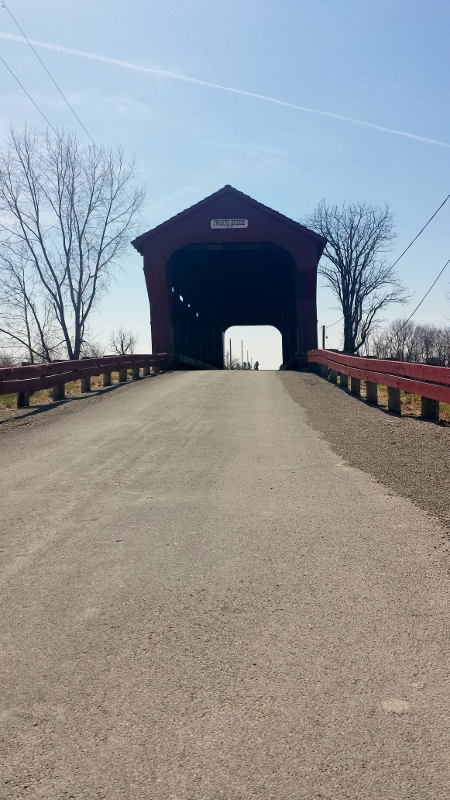 This covered bridge also sits over the Sandusky River, being originally built-in 1878 by Moses Weymouth. The average daily traffic in the 1970’s was just over hundred. The fact that no cars went by while I was there leads me to believe that the people passing through is still minimal. 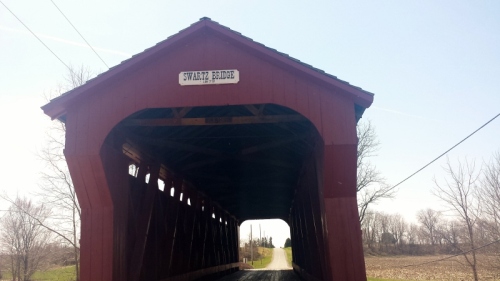 Shot overlooking the Sandusky River. Due to the recent snow meltage, lots of rain, the muddy waters and nothing blooming yet, didn’t really check out the riverfront at either stop. 🙂

Covered bridges definitely bleed romance. I don’t know if it’s the river that flows underneath, the history behind them, the remoteness and privacy of the timber built structures or the surrounding colors of Spring and Autumn (which I need to see), it’s just a beautiful scene up close. Besides romance, back in the day they were also used for meetings, rallies and dances. 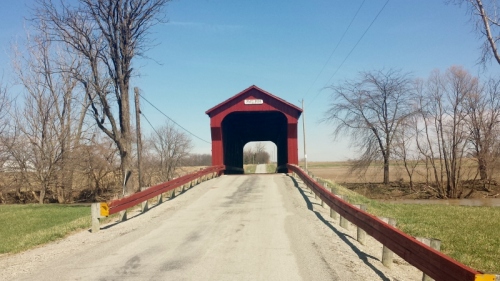 This covered bridge, like the one before, naturally has a weight limit due to how it’s constructed.

I look forward to uncovering more historic covered bridges in the future. Look how many this map of Ohio highlights! The Buckeye State is only second to Pennsylvania.

Any recommendations on covered bridges to checkout in Ohio, the Midwest and beyond?

Every time I’m in Cleveland, usually once a season, I gravitate towards Edgewater Park which sits just west of downtown. This week was no exception. I made a stop there right before sunset on a cold, wintry day. Lake Erie, one of the Great Lakes, was there to greet me front and center. No land as far as the eye can see.

The pier was closed, but makes for a great spot for hanging out, chasing pigeons and soaking in the views in the warmer months. More on this in a moment. 🙂

I slowly starting walking along the frozen lake, changing my view-point from due north to east. Two things were starting to come into view. 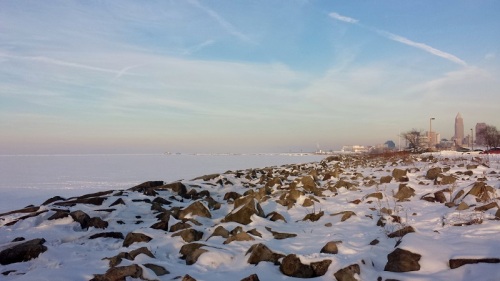 Straight ahead now was an open snowy path and the Cleveland skyline! I was out on the open trail towards downtown.

Due to the amount of snow in the Midwest this season I didn’t get very far as the snow pack was deep. That didn’t stop me from just standing there and taking the scenery in though.

After a little bit it was getting closer to sunset so I turned to the west and was greeted with something beautiful. 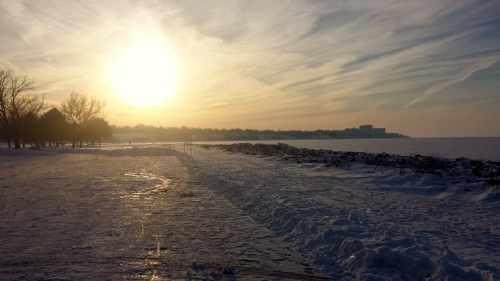 Back to the pier, this park makes me smile even more, because it’s where I fell in love with the love of my life. A few years back we were in the initial dating stage, hanging out at the park. She was busy chasing some of the aforementioned pigeons off the pier. I was watching her in action and I thought to myself for the first time, “I am falling in love with this girl”. 🙂 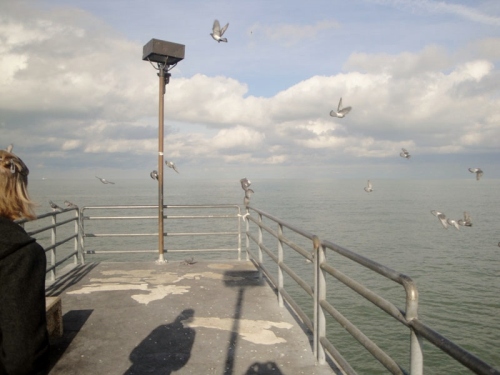 Now wonder I keep coming back here. It’s not all about travel and scenery at this spot along Lake Erie, but romance too. Happy Valentine’s Day to all!

Are there any memorable parks, trails or spots along the water that you have spent time in around home or in your travels?

I’m always on the lookout for new, independent coffee shops to checkout. While working in a Toledo, Ohio area coffee shop a while back I struck up a conversation with Ben Vollmar. I could immediately tell of his knowledge and passion for everything coffee. While talking he mentioned that he was in the process of opening up a coffee shop in the area.

Well Ben and his wife Cassy, who is also passionate about coffee, are seeing their dreams getting closer to reality! They have selected Bowling Green, Ohio as the place to open Flatlands Coffee. Their goal is to bring an authentic, 3rd wave coffee experience to the community and northwestern Ohio.

They are currently in the process of gaining the last part of their initial total startup costs through Kickstarter.

You can find them on Facebook and Twiiter. Also, checkout their Kickstarter page to see more of what they are all about and how you can help.

I’m looking forward to experiencing the coffee, atmosphere and everything else that Flatlands Coffee will have to offer. 🙂 To more great coffee!

Dayton: Running Into a Skyline Shot.

Recently I was heading south down I-75 through Ohio and decided to stop off in Dayton for a coffee. Getting off the interstate and heading towards downtown I ran into Deeds Point MetroPark. I saw opportunity. Getting out of the car and walking onto the bike path, the opportunity was right in front of me. Dayton’s skyline straight ahead opposite the Great Miami River.

I grabbed some more skyline shots as I was walked towards the tall buildings. 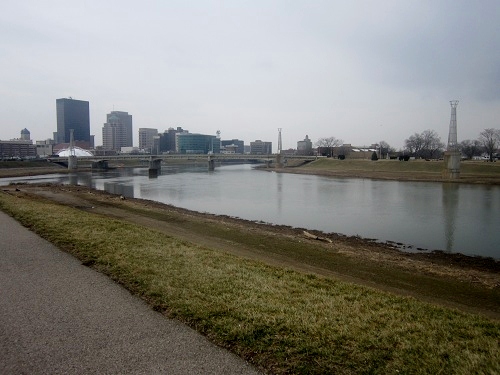 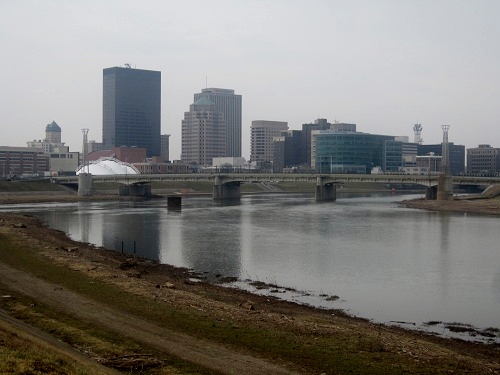 The walking continued until I reached the end point of the park which is where the Mad River flows into the Great Miami from the left.

I walked to the center of the bridge to capture some more photos. 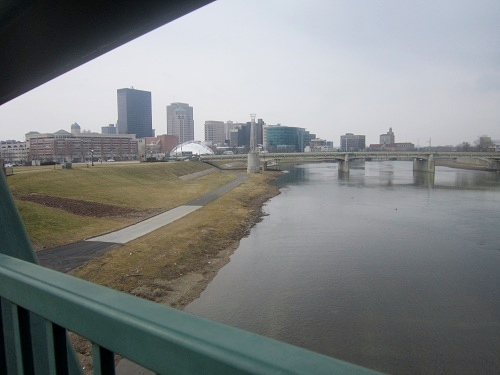 Of course I’m going to stop at park benches and soak in the romantic and scenic setting. 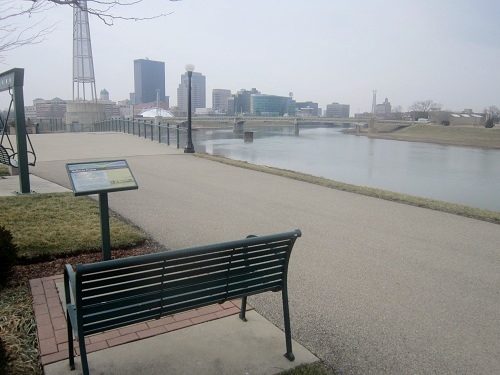 Within the park you’ll see a bronze statue of the Wright Brothers, Wilbur and Orville, as the Wright family is from Dayton. As you probably know they are aviation pioneers, inventing and building the first successful airplane.

What a wonderful and unexpected stop. You never know when that next travel opportunity will strike. 🙂 If your ever driving along I-75 through Dayton make sure to stop here to stretch on the trails and capture the scenic views of the rivers and Dayton skyline. 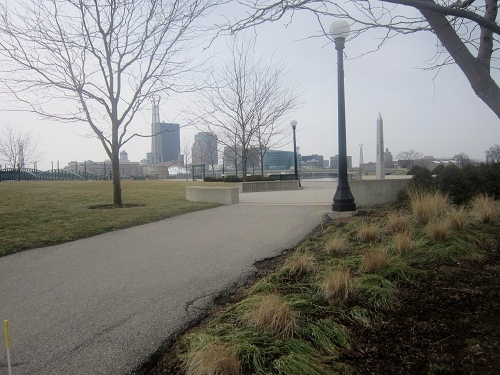 Where have you unexpectedly run into a skyline shot?