The Grand Haven Lighthouse and Pier from the “Other” Side

Standing up-top the sand dunes and staring out at the pier, the lighthouses and Lake Michigan in Grand Haven is my favorite spot in all of Pure Michigan. Each time I’m there I also walk the pier to its end passing by both lighthouses. While walking I always see people on the pier across the Grand River Channel fishing or walking.

With all the time I’ve been in Grand Haven I’ve never been over there. On recent road trip along the Lake Michigan coast I was hanging out at North Beach Park just north of town. I said to myself, now is my chance.

I took the short stroll down N. Shore Rd to North Shore Fisherman’s Pier. Immediately after parking in the small lot I was on the pier heading towards the small North Pierhead Inner Light. Low and behold there were fisherman and visitors walking the pier.

As I walked I looked over to the other side of the channel and it was cool to see everything from a different perspective from the dunes and the catwalk to the pier and two lighthouses.

It was a sunny day, but very windy. The waves were crashing onto the pier. People were stopping about half way down, myself included.

Despite that, it was a memorable walk because I finally got to see the Grand Haven Lighthouse and pier from the “other” side!

Tip: It’s a quick twenty minute drive to get here from the other side of the channel and downtown Grand Haven. While you’re there stop at nearby North Beach Park and the North Ottawa Dunes and make an afternoon out of it.

Michigan: Back to the Grand Haven Lighthouse I Go.

Grand Haven is a small Lake Michigan town along the west coat of Michigan. It’s one of the many places I keep going back to over-and-over again because of its beauty. It was the second stop on a recent day of lighthouse, beach and park hopping along Lake Michigan after Muskegon.

I decided on this visit to grab some shots of things I hadn’t really before. Like the sand and… 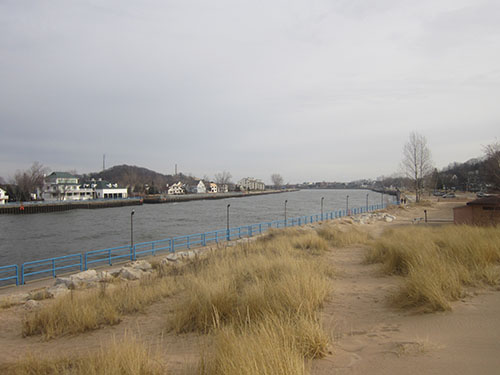 …the catwalk that connections the lighthouse to the mainland. I walked underneath and alongside as I descended towards the lighthouses. The catwalk is one of only four left that you’ll find in Michigan.

Reflection shots of the water on the pier that came up from the lake. The winds always seem to be whipping up in these parts. 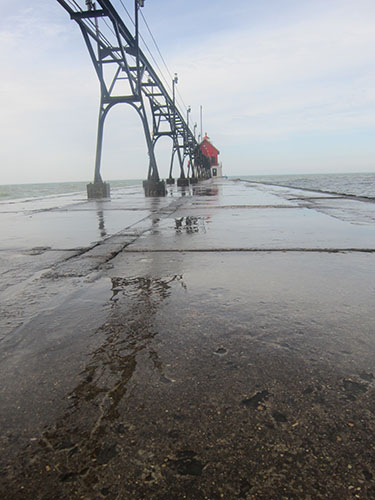 Of course I’m still going to grab more lighthouse shots, like this one of the red inner signal light.

It was a great time as always hanging along the lake and channel in Grand Haven. To get more information on the lighthouses themselves, as well as photos from my previous visits checkout Michigan: The Lighthouses of Grand Haven.

Also checkout the fun I had at my first stop of this day again in Michigan: Coastal Muskegon on a Winter Day. It was off to Holland next. Stay tuned! 🙂

Photo of the Week: A Little Bit of Everything in Grand Haven.

A little bit of everything standing on top of a sand dune in Grand Haven. Straight ahead you have Lake Michigan, the beach, pier, waves, two Grand Haven lighthouses and the end of the Grand River. From this spot at Grand Haven State Park you also have the dunes themselves, wind, cold air, and beauty. 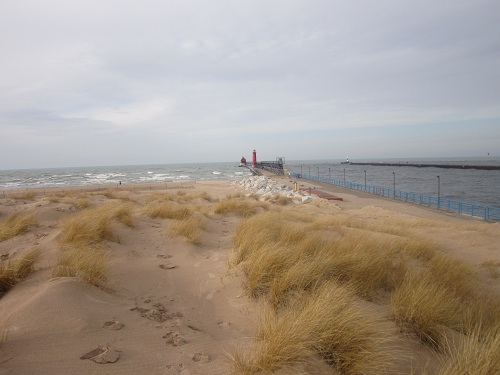 Michigan: The Lighthouses of Grand Haven

It was the middle of the afternoon one day recently and all of a sudden I had a travel urge. I was thinking lighthouses. What did I do? I got in the vehicle and made a quick road trip over to Grand Haven, Michigan.

I got there right before dark. The lighthouses in Grand Haven are just outside of downtown. It was cloudy, so no sunset shots this time, rats. On the plus side, there was no snow on the ground, which is a miracle considering this area sits right in the heart of the lake effect snow belt of Lake Michigan.

Last winter was a different story. There were high snow drifts, cold, slush and ice everywhere.

I’ve had the chance to spend some time here in the warmer, summer months too.

The first lighthouse in the area was built-in 1839. You can get up-close and even touch, but you can’t go into either lighthouse as they are in use.

The two lighthouses are connected via a catwalk. Back in the day, this made it easy for the lighthouse keeper to walk from one to the other. Yellow lights run the complete length of the pier. 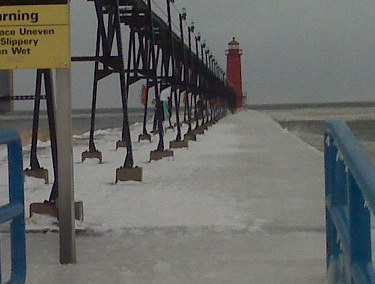 The South Pier where the lighthouses reside is an extension of “The Boardwalk” (Lighthouse Connector Park). It extends 1,100 feet out into Lake Michigan. Alongside you’ll see the Grand Haven channel which connects Lake Michigan with the Grand River.

There is also a north pierhead light on the opposite side of the channel.

Right alongside the pier and boardwalk is Grand Haven State Park, which is all beach and nationally recognized by Good Morning America as one of the best family beaches in the United States. Great views of the beach can be had from the lighthouses and pier and vice versa. 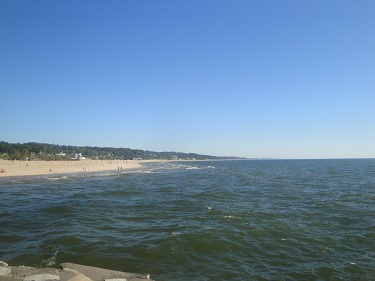 The Grand Haven lighthouses, pier, state park and boardwalk make for a great time no matter the weather, season or time of day. It was definitely worth the short drive.

Now I just gotta make sure I get here around sunset. A sunset over Lake Michigan, with the sand, pier and lighthouses as a backdrop, a romantic setting I need to see! What is your favorite lighthouse? Is it close to home?