Pittsburgh, known as “The City of Bridges” and “The Steel City”, is home to some of the best views in the United States, the best being up-top the Duquesne Incline and along Grandview Avenue in the Mt. Washington neighborhood. USA Weekend’s 2003 Annual Travel Report ranked the Mt. Washington view the second most beautiful place in America. Panoramic shot from one of the overlook decks along Grandview Avenue.

How to get up there? You could drive, but the fun, historic and scenic way to get up-top is to take the Duquesne Incline. You can get to the incline easily by taking the Fort Pitt Bridge out of downtown.

Open in 1877, it’s one of the few inclines left in the United States and one of two left open in Pittsburgh. These inclines were originally used to carry people and freight between the city and the hills. Residents of Mt. Washington still use the incline to get to work and the various entertainment options in the city. 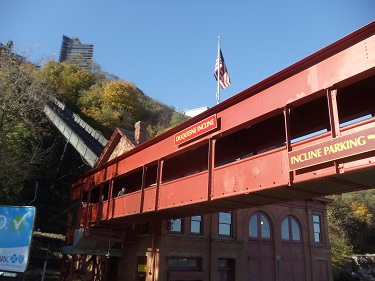 Heading up in the wooden incline car takes only a couple of minutes, you’ll rise 400 feet up to an elevation of 800 and you’ll be in awe as soon as you start going up.

You exit the incline car into a little museum detailing some history of the area. You then can head outside to the observation deck and below is what you see. Panoramic views of the skyline, the Allegheny and Monongahela rivers coming together to form the Ohio River at Point State Park, the sports stadiums, all the famous bridges and more. Being there at the beginning of November gave me the added bonus of seeing all the Fall colors. 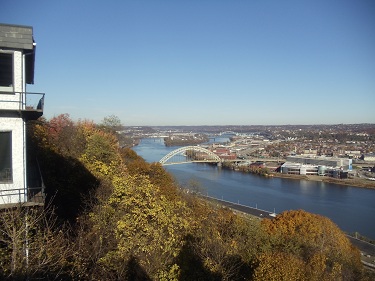 Watch and snap some photos of the cable cars going up and down the incline with the downtown skyline as a backdrop.

Leaving the Duquesne Incline to the left, walk along Grandview Avenue and you’ll pass homes, apartments, condos and fancy restaurants with spectacular views. You’ll then come to various overview decks where you can view the city and surrounding hills and country side from various vantage points.

At the end you’ll come to the other incline still in operation, the Monongahela Incline. Checkout the nearby Shiloh St. and Grand Brew Cafe. A neighborhood coffee shop with great coffee, pastries and customer-oriented service.

My next trip up the incline will be to soak in the spectacular views at night. What is your favorite observation, lookout point?