The skyline. Anyone who follows me on this blog or on social media knows I like to capture city skylines. With that I got excited starting the A Million Skyline Looks series.

Toronto, Chicago, Auckland and now it is Atlanta’s turn. The unofficial capitol of the South has distinct skylines in both Midtown and Downtown.

Photo opportunities to capture both from parks, bridges, high up-top sky rises and from right out on the open road (as a passenger of course) have presented themselves, along with many more. Coming up with a million skyline looks of a place I’ve lived in and visited a lot is easy. Well without further ado:

Eat a burger from this ATL institution, the Varsity, while capturing the city.

Head to the park behind the Jimmy Carter Library and Museum in the Poncey-Highland neighborhood.

Skyline trying to peek out from the Jimmy Carter Library and Museum.

The Downtown skyline and state capitol from near Turner FIeld.

The Downtown skyline and state capitol from what was once Atlanta–Fulton County Stadium. 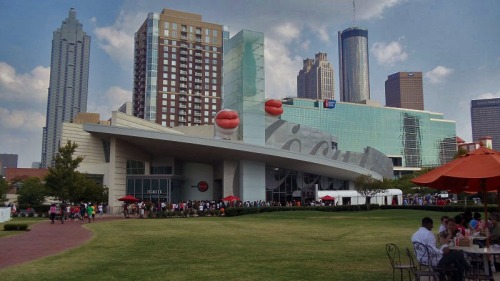 Downtown helping to protect the World of Coca-Cola.

Midtown view from 73rd floor of The Westin Peachtree Plaza at The Sun Dial restaurant. 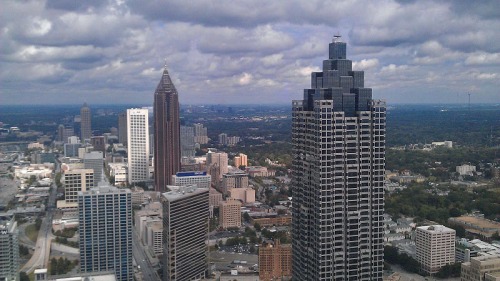 View from 73rd floor of The Westin Peachtree Plaza at The Sun Dial restaurant. SunTrust Plaza is standing tall.

Love looking straight up in a big city. 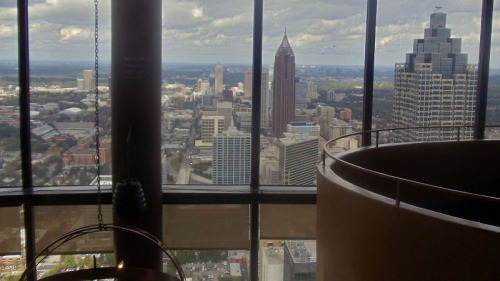 View from 73rd floor of The Westin Peachtree Plaza at The Sun Dial restaurant.

The skyline is playing peekabo in Piedmont Park.

Exit for the Downtown ATL skyline anyone?

One Atlantic Center, the tallest building in Atlanta, standing in Midtown.

Heading right into the heart, northbound on the Downtown Connector (I-75/I-85). 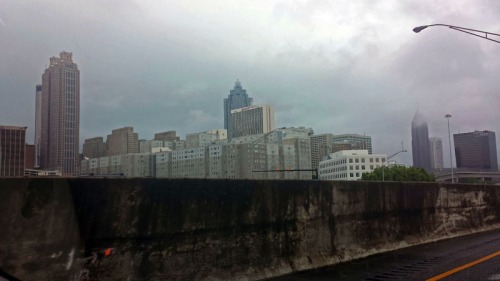 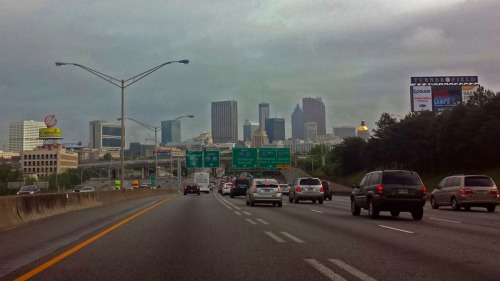 Heading into the city from the south. Can you see the Georgia State Capitol? 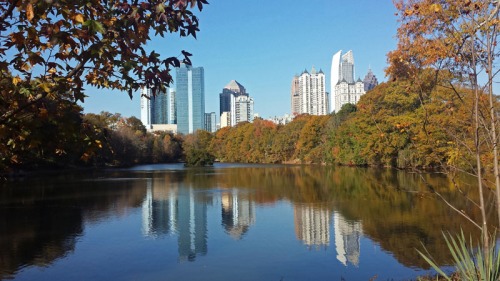 The pond and spot to grab a city shot within Piedmont Park.

Midtown will greet you at the end of a climb in Piedmont Park. 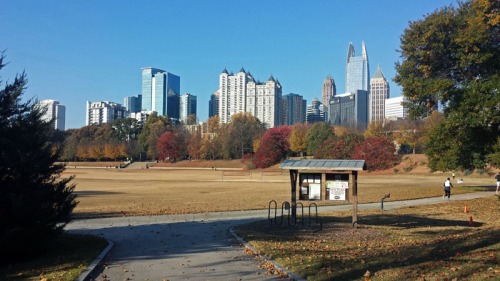 Midtown in Autumn, straight ahead at Piedmont Park. 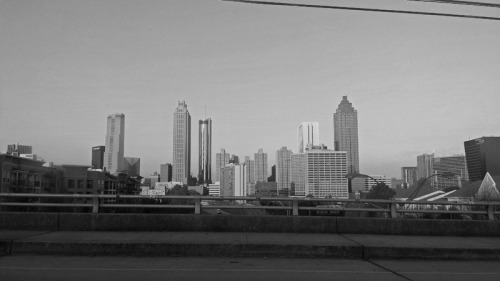 Good reason you think to pull off the road on Boulevard NE in the Old Fourth Ward neighborhood? 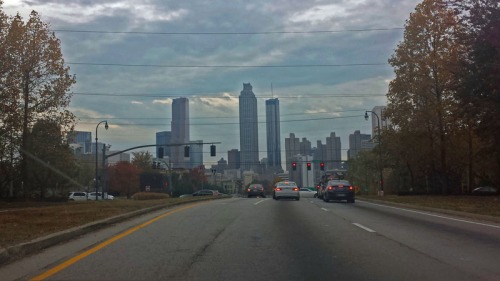 More Atlanta skyline opportunity out on the open road in Old Fourth Ward.

Heading off the interstate and into the heart of the Midtown skyline.

My favorite place to capture the ATL skyline is the 17th Street Bridge, my peaceful place.

Many, many, many lanes heading into the city from the 17th Street Bridge.

What other spots would you recommend capturing the Atlanta skyline from?

The time to see the colors of Fall usually stretches well into November in the Deep South. Piedmont Park in the heart of Midtown Atlanta, Georgia was no exception.

Checkout the Autumn colors to expect when taking a stroll through one of the biggest city parks around. Walking alongside Lake Clara Meer and the Active Oval is highly recommended. Atlanta’s Midtown and Downtown skylines will be in view for a lot of the ride. Well without further ado. 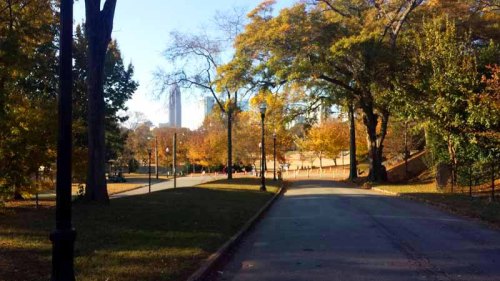 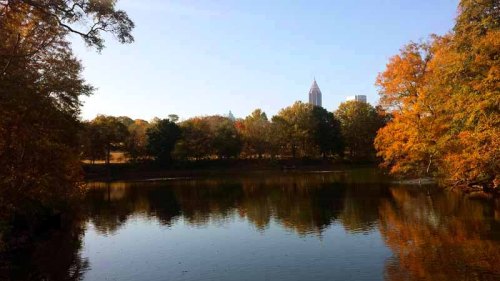 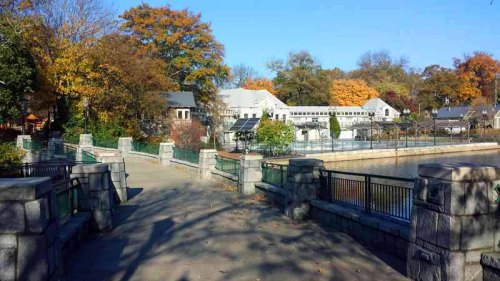 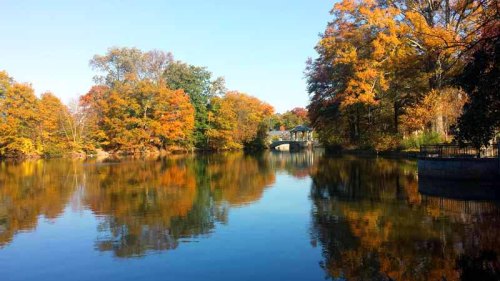 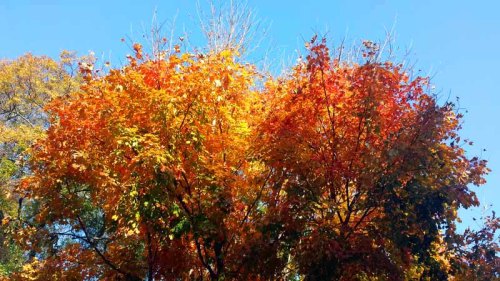 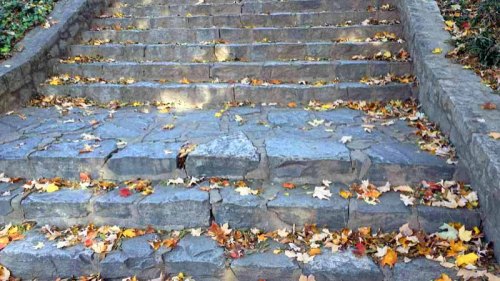 View my post Midtown Atlanta: Relaxing in Piedmont Park for more information on the park itself.

What big city parks would you recommend checking out in Autumn?

Midtown Atlanta, located between downtown right to the south and the well-known Buckhead neighborhood to the north, is home to a good portion of the cities skyscrapers, the music/artistic scene, great eats, nightlife and people have been moving in in droves. 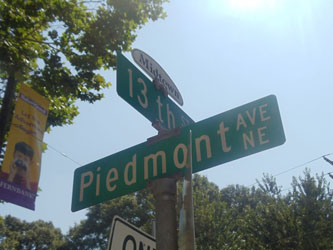 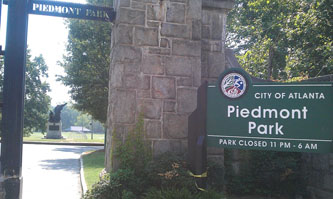 Right in the heart of the Midtown Neighborhood is the 185-acre Piedmont Park which is open year round. The biggest park in the city opened in 1887 and was designed by Fredrick Law Olmstead, Jr., who also designed Central Park in New York City. 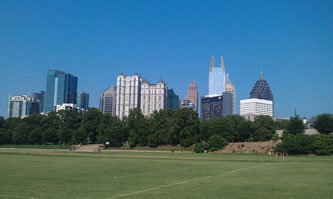 You can get countless vantage points of trees, flowers and other greenery and the Midtown and Downtown skylines. 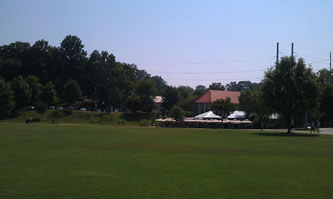 Lot’s of open space to lay down and relax, have a picnic, grill, hang out with friends or to start-up a game of flag football or rugby.

Checkout Park Tavern on the southeast edge of the park. It’s home to many special events and weddings and you’ll find sushi, seafood, American cuisine and more on the menu. Adjoining the park on the north and east ends is the Atlanta Botanical Gardens.

The Active Oval is a dirt track originally a horse-racing track. Within the oval are soccer and softball fields and sand volleyball courts, all requiring a permit. Friday’s are the exception so get there early to nab a spot. Within the park there are also basketball and tennis courts, fishing and swimming opportunities, playgrounds, a dog park and bocce ball. Check to see if permits or passes are required. Miles of paths for biking, walking and jogging as well. There is even a Beer Gardens.

Checkout the concerts, festivals and other special events that are happening at the Piedmont Park website and also check them out on Twitter. If you’re in Atlanta and looking for a place to relax, get great views and have some fun, Piedmont Park is a place to checkout.